The Lassithi Plateau: The Lassithi (Lassithi) plateau is located between the Dhikti and Selena Mountain, the road towards it because of the fantastic scenery is quite spectacular. The plains (about 5 by 5 km) are 850 meters high and are well accessible from Hersonissos (30 km), Stalis (24 km) and Agios Nikolaos. There are many traditional villages on the edges and on the plains, which are worth a visit.The largest village is Tzermiado. The hundreds of windmills in the Lassithi plains are very noticeable, these windmills were used by the inhabitants to pump water from the ground, now they are just standing there as a backdrop.

The cave of Zeus: The village Psichro is located North of the valley. From the parking lot there are two paths that can lead you to the cave of Zeus. The paths are quite steep so if you want to do the walk you have to be agile, this hike takes about 15 to 20 minutes. The legend says that Zeus was born here. Near the cave there is a kiosk where you can buy tickets (€ 4 for adults, children do not pay). The cave is very deep; you can walk all the way down through two stairs (200 steps). The cave is now beautifully lit and in the cave there are beautiful stalactites and stalagmites.

Lassithi Plateau in other languages


Lassithi Prefecture: Where on the map is Lassithi Plateau located? 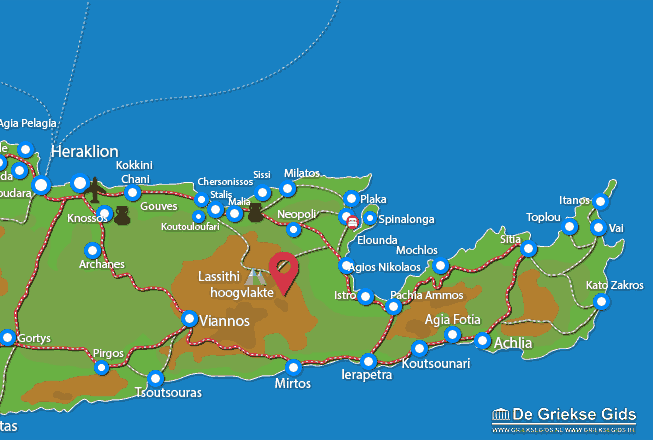