ZAKROS. Zakros is a traditional Cretan village between Sitia (40 km) and Palekastro (20 kilometers). The inhabitants (about 1000) are generally farmers and fishermen. Zakros consists of Epano (above) Zakros and Kato (Lower) Zakros. Zakros is located on the seafront and about 7 km from Epano Zakros. In the surrounding area there are numerous springs and archaeological finds. Zakros is on the southwest coast of Crete. It is a small fishing village with a large sand and pebble beach. At the beach there are several fish tavernas, cafeterias and other restaurants. Just behind the beach of Kato Zakros are the remains of a Minoan palace located. This palace has prospered in the period 1700 BC to 1450 BC. It came to an abrupt end after a massive earthquake struck the area. It is worth a stroll through the gorge called the "Death Valley". The "Death Valley" runs from Epano (upper) Zakros to the sea at Kato (lower) Zakros. Recommended for walkers and nature lovers.

Epano Zakros (Zakros), which is about 110 kilometers from Agios Nikolaos, is located between two hills and is completely surrounded by olive groves. In Epano Zakros are springs that are well worth a visit.

Kato Zakros in other languages


Lassithi Prefecture: Where on the map is Kato Zakros located? 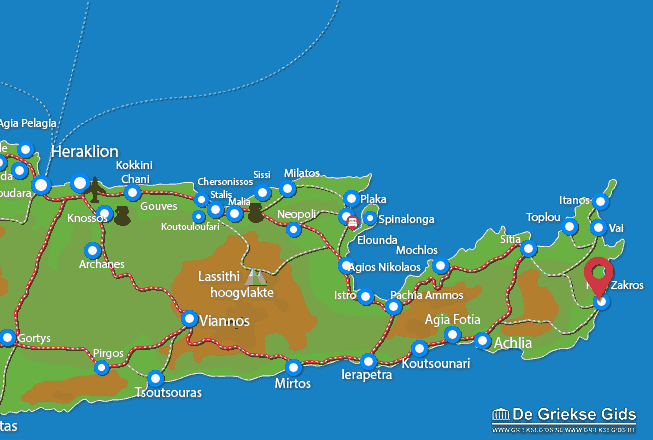