Sitia (Siteia). Sitia is a nice town on the northeast coast of Crete, it is located 70 km east of Heraklion. It’s a wonderful place to go on vacation because there is plenty to do, it's very nice and it's not so commercial. We have visited this beautiful town several times and each time we enjoyed the atmosphere, the people and the environment. Sitia, which lies on the slopes of a low hill, exudes cosiness and warmth. It is a pleasure to walk on the boulevard at the harbour in summer. Besides the boulevard are dozens of outdoor cafes where you can relax and enjoy a nice glass of wine or a delicious Greek dish. Sitia is the easternmost city of Crete. The arrival of the airport makes the east of Crete easily accessible for tourists. Previously it was difficult to get here because of the large distances and the roads full of curves. A ride from Hersonissos to Sitia lasted for about two hours and from Rethymnon more than three and a half hours. It is not just the town which is very nice and where many ancient sites and museums can be seen, it is also the area itself which is more than beautiful. Sitia has a very nice beach, but the most impressive beach on Crete lies entirely on the east coast at 10 kilometers from the city (Vai).

Sitia in other languages


Lassithi Prefecture: Where on the map is Sitia located? 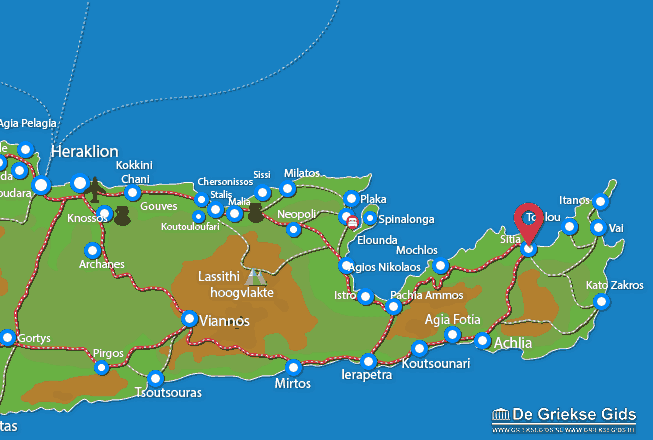