Naxos was a part of Greek history and culture in early times, and in the Cycladic era it blossomed. Naxos town (or Chora) is, without a doubt, one of the most beautiful Cycladic towns. From the harbor to the top of the village at the Venetian castle, the visitor will remain impressed by the narrow, steep streets and old stone houses.

The beautiful sandy beaches, picturesque villages and the many attractions combined with good tourist infrastructure attract many visitors every summer. One of the most famous archaeological sites on this Greek island is the 2,500 year old temple gate (Portara).

Naxos is famous for marble that is quarried here. Since ancient times Naxos, and the neighboring island of Paros, have been known for good quality marble. Naxos is an island that can serve as base for island hopping. The central location of Naxos, and its connections to the other Cyclades islands makes Naxos an ideal base to explore all the Cyclades and the Aegean Sea.

- The Portara at the entrance to the port of Naxos town. It is the Greek temple of Apollo, dating from the 6th century BC.
- "Grotta," a district near Naxos town, which was built in the Mycenaean period and now lies underwater.
- The castle in the heart of Naxos town, where fine antiquities from the 14th and 15th centuries can be seen.
- The Venetian church, convent and home of the Catholic bishop in the heart of Naxos town.
- About 45 churches, including the Panagia Vlachetnitissa with its stunning templon.
- The Monastery of Aghios Ioannis Theologos.
- The Belonia tower, once the residence of the Venetian lord of the island.

Events that take place on Naxos:

-The Aghios Nikodimos party on July 14th - The biggest party on the island with dancing, drinks and fireworks which are launched from boats.
-Dionysia, a cultural event with concerts and dance, takes place in the 2nd half of July and is organized by the municipality.

The most beautiful beaches of Naxos

The most beautiful beaches of Naxos are in the west of the island. These are the beaches Naxos, Agia Anna, Plaka and Mikri Vigla.

How to get to Naxos

Naxos in other languages


Naxos: Where on the map is Naxos located? 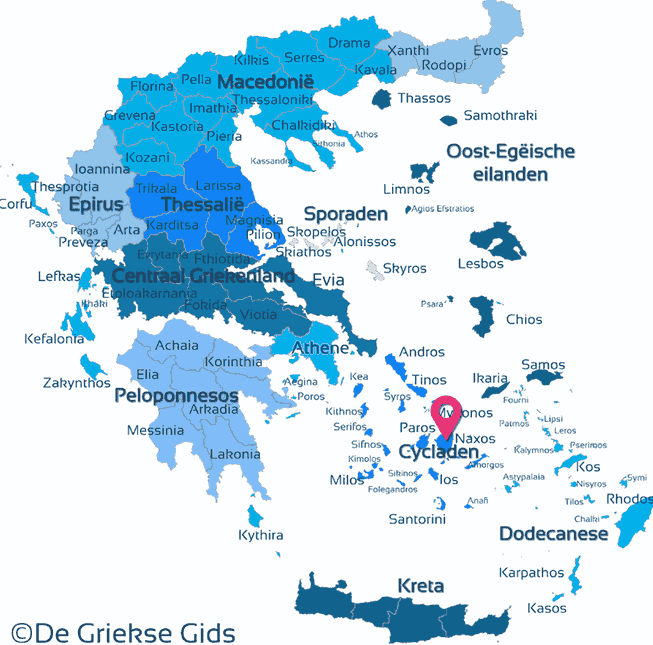 The map of Naxos - ©JustGreece.com