Koronos. Koronos is a traditional mountain village on the Greek island of Naxos, 27 kilometers (17 mi) northeast of Naxos town. It is an agricultural town, situated on the slopes of a mountain. Many of the residents are farmers. Across this region, delicious potatoes are harvested. The village is located about 500 meters (1,600 ft) above sea level, in an area with much greenery and trees. The beautiful village square has lots of narrow alleys and stairs. There is also plenty of flowing water. To the east and south of the village are the Emery mines where many of the inhabitants of the village work. Emery is found on both Naxos and Samos. Emery is a stone used in powder form for making sandpaper. The Greeks call Emery, Smyrida.

Landmarks:
In addition to the Emery Museum and the town square with its very nice taverns, the following are found in Koronos:
- The war memorial in memory of the fallen during the Second World War
- The ethnological museum
- The renovated mills that used to produce oil
- The church of Agia Marina from the 10th century
- Kako Spileon, the bad (evil) Cave (altitude of 930 meters/3,000 ft) located west of Koronos. In ancient times God Dionysus was honored here.


Naxos: Where on the map is Koronos located? 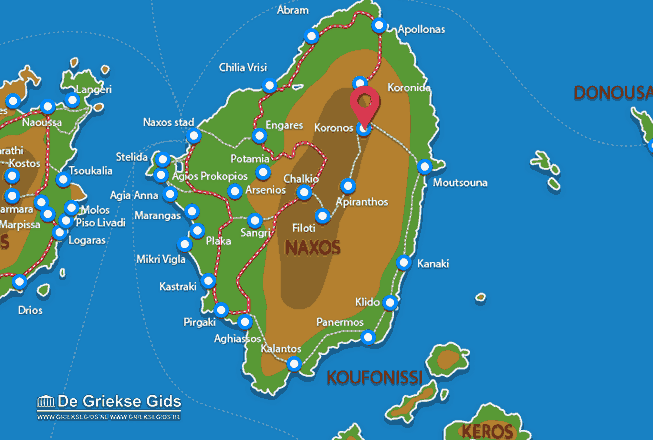