Alyki. Alyki is a beautiful traditional coast hamlet in the southeast of the Greek island of Thassos, located 31 kilometers from Thassos town (Limenas). It lies on the narrow strip of the peninsula and here live only 50 permanent residents.

Alyki is inhabited since the 7th century BC.

Alyki was in ancient times a rich place and exported marble from the port of Alyki. Large boulders on the shore, provide evidence of this. Many hikers come here nowadays because there are several hiking trails. In Alyki are several nice beaches and pebble beaches, as on one side (south) of the peninsula there is a sandy beach and on the other side a small pebble beach where some tavernas and cafes are.

A little further, in the northeast, is the beach of Ai Giannis. Alyki is a quiet village in a beautiful setting. There are a number of rooms for rent and a few tavernas where delicious fish and other Greek dishes are served. Alyki is also accessible by boat; lots of boat trips are organised all over the island and a visit to Alyki is recommended!


Thassos: Where on the map is Alyki located? 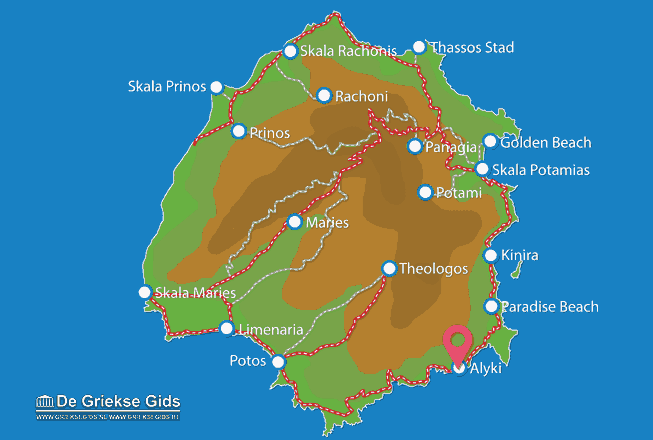