Kinira is a picturesque village with about 100 permanent residents, which lies on a bay on the east coast of the Greek island of Thassos. The village is built amphitheatrically on the green slopes of hills, 20 kilometres southeast of Thassos town (30 minutes by car).

The bay has been named after the small uninhabited island just opposite, which lies approximately one kilometre away. Kinira is a quiet village with a number of tavernas, shops and a mini market. It is a historic place, it is mentioned in the books of the Greek historian Herodotus. At various places archaeological finds from ancient times have been discovered. In this area, which was gold mined in ancient times, a lot of people worked in these mines.

The coast here is partly pebbly  (the central part), sometimes rocky (northern part), in some places there are small sandy beaches (southern direction - Paradise Beach). The most southern part of the bay is steep and rocky. Around the village and the length of the beach, are many olive trees, the higher you get, the more wooded the area is, here you’ll see lots of pine trees.

Paradise Beach: Kinira is a village known for its fine seafood restaurants and especially because of exotic ‘Paradise Beach’ which is a little further south (2 km). The water here is very shallow, many find Paradise Beach one of the most beautiful beaches of Thassos, which is due to the wonderful greenery of the hills around the fantastic sandy beach.

From the steep hill, behind the beach, one can take beautiful pictures of the scenic bay and the opposite island. On the beach are sunbeds and umbrellas for rent. Paradise Beach is accessible via a dirt road, you can leave your car next to the beach.


Thassos: Where on the map is Kinira located? 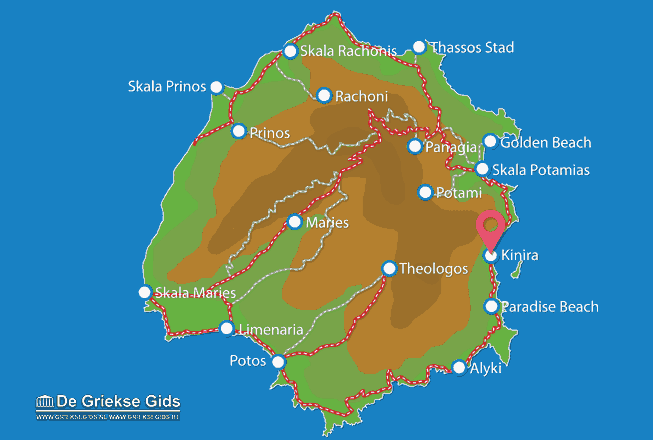