Maries (M-a-r-i-e-s). Maries is a small picturesque mountain village in the southwest of the island of Thassos in Greece. It lies on the steep slopes of a mountain, 42 kilometres from Thassos town. In the village in which 200 inhabitants live, are several shops selling local products like honey. It is an old village where in the previous century, metal mines were located.

The Church of Maries was built in the year 1800, the churches name is the 'Assembly of the Archangels'. It is said that the village had been named earlier by the many ‘Marys’ who lived there. Around the village are several hiking trails, hikers will certainly have fun here! Near Maries is also an artificial lake where you can see a small waterfall. From here you can walk to the top of the mountain Ypsario that lies at 1206 meters above the sea level. The view from up here is fantastic.

Maries in other languages


Thassos: Where on the map is Maries located? 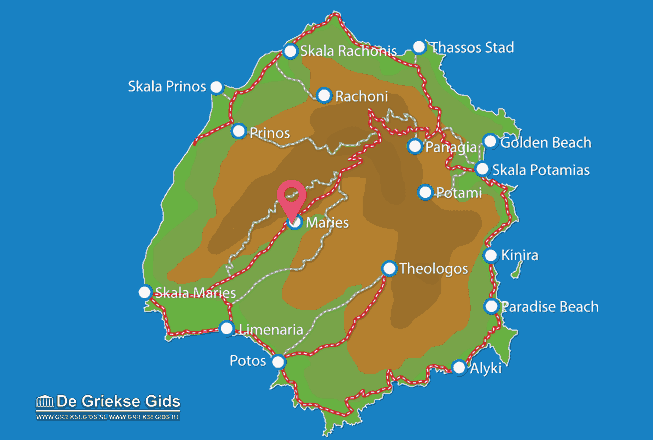