Potos. Potos is a tourist village, 42 kilometres southwest of Thassos town and is the most popular place for young people because of its good nightlife. Here are several beautiful sandy beaches and around the beaches are all kinds of shops, souvenir shops, restaurants, fish tavernas, pubs, bars and cafés. The beaches are well organised, everywhere are umbrellas and sunbeds to rent. There are also several beach bars where you can even dance during the day. All kind of water sports are possible and if you want to stay,  there are both cheaper rooms and expensive hotels.

Potos was originally the fishing port of the historic capital of Thassos, Theologos, which is inhabited since ancient times. Many residents of Potos are fishermen and that is because of the sea,  south of Thassos,  is richer in fish than the sea, north of Thassos. The waters here are many times deeper. The inhabitants of Thassos are mostly engaged in fishery and agriculture, but also in tourism. Especially the months of July and August are very busy and noisy. The sunsets are beautiful here, from here you see the sun disappearing behind the mountains of the peninsula of Athos. Today, in Potos live about 700 permanent residents.

Potos in other languages


Thassos: Where on the map is Potos located? 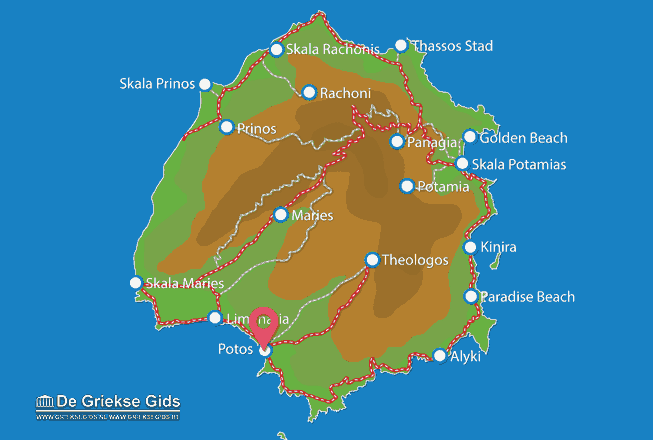