Limenaria. Limenaria (pronounced Limenária) is the second largest town (2500 inhabitants) on the island of Thassos in Greece. It is a tourist town with beautiful sandy beaches and a harbour where many speedboats and fishing boats are parked.

Limenaria is located in the middle of a beautiful area, about 40 kilometres from the capital of the island Thassos town and 25 kilometres from Skala Prinos. In Limenaria are many restaurants, cafes, ouzeris, tavernas, bars, shops, souvenir shops and mini markets located. There is also a good nightlife, Limenaria is a lively town. It has retained its original traditional style and there are many beautiful neoclassical buildings.

The largest beach of Limenaria is located two kilometres west of the city, east of the city lies the beach of "the Metals". This name is given to the beach because of the fact that this area is very rich in all kinds of metals. In the early 20th century the metals were exploited by German and French companies. A mine from that time can still be seen here. The arrival of the mine at that time, caused an enormous growth of the entire population, a lot of people from around and the from the surrounding villages came here to work. There were also Greek refugees from Turkey who came here to start a new life. These refugees founded the village Kalyves, which lies just outside Limenaria. In Limenaria are many hotels, studios and apartments where one can stay.

- The old mines
- Palataki (= little palace) is the building that the German firm "Speidel" built in 1903 and which served as an office for the mine.
- The Ethnological museum
- Ruins and remains of buildings and artifacts from prehistoric times
- the sandy beach Trypiti where you can see a sea cave.
- The church of Agios Athanasios on the town square.

Limenaria in other languages


Thassos: Where on the map is Limenaria located? 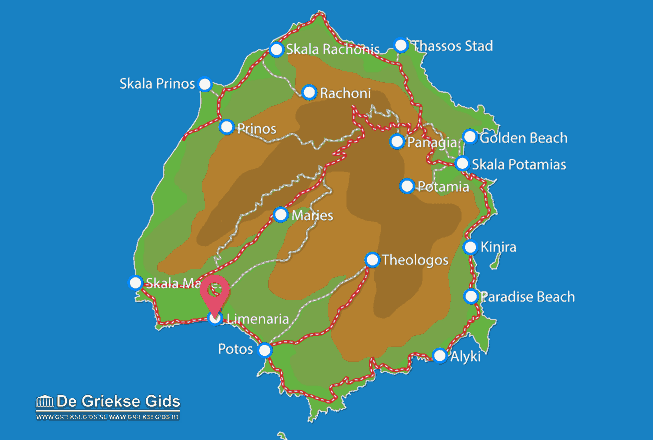