Panagia (Skala Panagia - Golden beach). Panagia (literally  means "Holly Mother") is a beautiful traditional mountain village on the island of Thassos in Greece, seven kilometres southeast of Thassos town (Limenas). It is a village where houses are built in the Macedonian architectural style; white houses with stone tiles are typical features of the architectural style of the houses here. When you walk through Panagia, you will see many beautiful mansions and narrow cobbled alleyways.

Panagia is situated in a beautiful green area with plenty of running water. At the beginning of the 19th century and for a short period, it was the capital of the island. The inhabitants of Panagia are besides in tourism, engaged in agriculture (olive groves) and also in the production of honey.

- Drakotripa (The Dragon hole) is a cave near Panagia where a stalactite hangs in the shape of a dragon.
- The Church of the Holy Mother in Panagia
- Traditional celebrations: Carnival, Easter and on August 15, the feast of the Blessed Mother.

Panagia in other languages


Thassos: Where on the map is Panagia located? 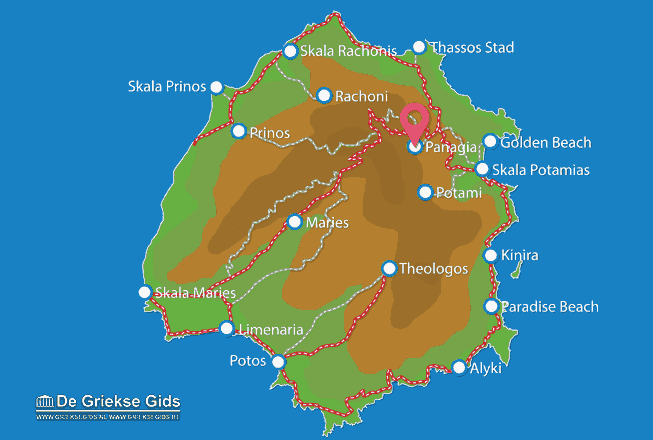