Prinos. Prinos (1400 inhabitants) is the name of a group of villages and mountain villages in the northwest of the island of Thassos in Greece. This village became suddenly famous because of the fact that in the sea area between Prinos and Kavala, oil was discovered.

The villages of Prinos:

a) Skala Prinos is the village on the coast, where in the recent years tourism has developed tremendously. At the coastline are many restaurants, cafes, mini markets, car rentals and other shops. There are beautiful sandy beaches, two of which have received the "Blue Flag" award, the quality symbol of good beaches and a clean sea.

b) Megalos Prinos, also Megalo Kazaviti, is a traditional mountain village in the middle of a beautiful natural environment.

d) Prinos is located on a hillside and is also named Kalyves.


One of the main attractions in Prinos is the Monastery of Agios Panteleimon where the church dates back to the year 1843. In this monastery there is space for pilgrims who wish to stay or overnight. According to tradition, Saint Panteleimon, has lived as a monk in a cave near Prinos.

Prinos in other languages


Thassos: Where on the map is Prinos located? 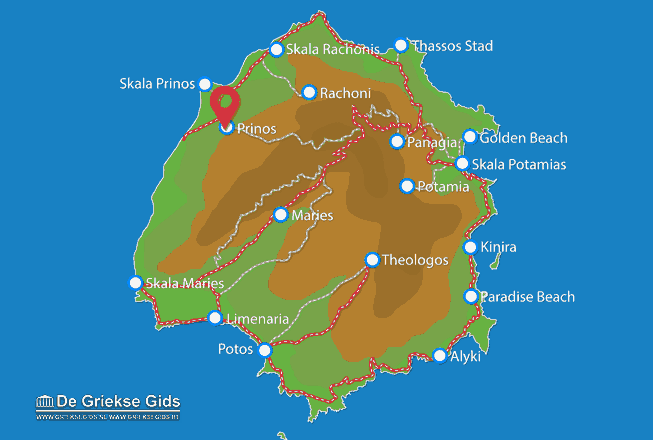