Aroniadika. Aroniadika is a traditional village with stone houses, narrow streets and many arched bridges. The village is more or less located in the centre of Kythira, ten kilometres from Aghia Pelagia and fifteen kilometres from the capital Chora. When you arrive at the village, the first thing you see is the church, with its green and red dome. In the village there is a very nice yellow-blue coloured kafeneion, a good restaurant at the T-junction and there is a supermarket.

The village is known for its beautiful traditional buildings and because of the production of good honey. Some hamlets in and around the village have been declared protected architectural hamlets. What impresses most is the variety of the front doors of the houses in all shapes and colours. Above the door, on the façade, usually you can see the date the house was built. People have lived here since the Middle Ages. The old abandoned buildings that stood here have been restored in recent years making the village popular. In and around the village are several apartments to stay. According to tradition, this village was founded by the inhabitants of Paliochora after 1537 when the pirate Barbarossa pillaged their village. The name ‘Aroniadika’ is derived from the name Aronis, which was a prominent family in the 18th and 19th centuries. Most buildings in the village consist of two floors with exterior stairs. The houses are built close together and the stone alleyways are narrow. The village experienced in the 19th century, great prosperity, which was partly due to the many craftsmen who made metal farm implements such as shovels and hammers.


Kythira: Where on the map is Aroniadika located? 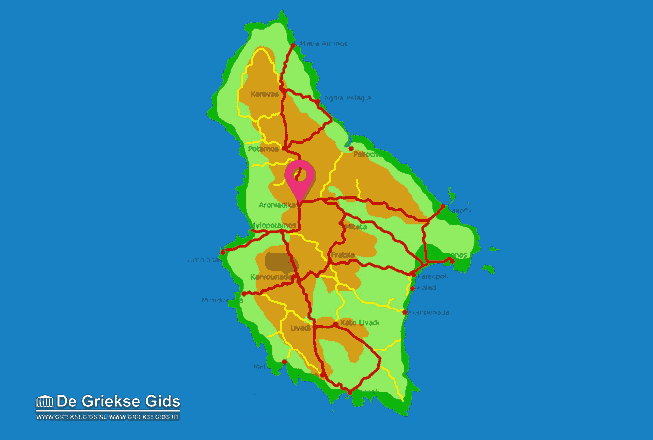