Potamos. Potamos is a traditional main village, one of the largest on island Kythira (500 inhabitants). In Potamos is the Church of the Holy Mother Ilariotissa located. Formerly the village was called "the village of the Lady", referring to the Blessed Mother. Potamos, literally means river and is a village that is characterized by the rich vegetation. It is located 346 meters above sea level, in the north of the island, seven kilometres from Agia Pelagia and twenty kilometres from Chora (Kythira town). In the village are many shops, banks, cafes and restaurants and every Sunday there is a market where mostly local agricultural products are sold. It's nice to see how the villagers set up their tables and display their own products, such as olive oil, cheese, honey, figs and jam.

If you come in Potamos, the best you can do is park the car on the large parking in the center of the village, it is indicated with a sign. The small-grill house restaurant on the main road in the village is well worth a visit. There you can get delicious pitas with souvlaki or gyros, but also a large selection of Greek specialties such as stuffed tomatoes, mousaka, spinach appetizers etc. A highly recommended place for a quick bite (very good pita gyros) or a real Greek meal but also a great spot for relaxing, on the terrace across the street. In Potamos you can see many beautiful traditional buildings, some traditional mansions and the old English school which has been recently restored and was built in 18th century. There is also a retirement home and the village has its own philharmonic orchestra. Here in the village is also the only hospital on the island on the way to Aghia Pelagia. Near the village is the monastery of Saint Theodoros built in the 12th century and the historic bridge with seven arches.

Outside the village, in the direction of Agia Pelagia, is a tree with a bench around it. This is the monument called "the place of tears of happiness and tears of sadness", established in 1908 to commemorate the people said goodbye to the many people who emigrated abroad. Usually, people emigrated to Australia. In Australia today, there is a large community of 16,000 people, which are parents or ancestors from Kythira, while on the island itself live only 3000 people. The cultural association of Potamos is among the most active of the island as there are all kinds activities and exhibitions held throughout the year such as painting exhibitions and photography exhibitions. A good tip for walkers: From Potamos you can follow a beautiful trail for about an hour and fifty minutes to the village of Paliochora.

Potamos in other languages


Kythira: Where on the map is Potamos located? 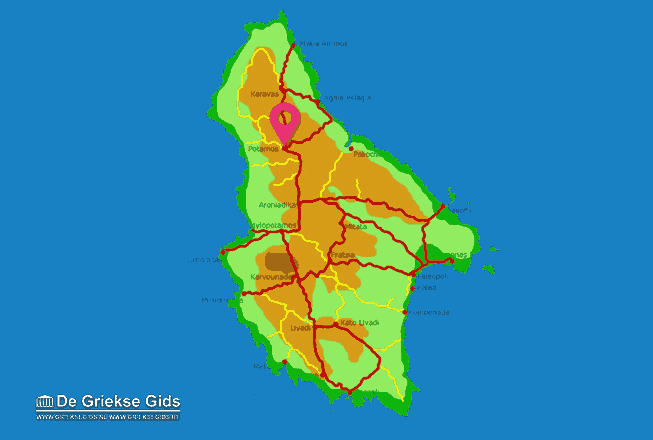