Karvounades. Karvounades is a village, seven kilometres north of Chora (Kythira town), the capital of Kythira. The village lies at 322 meters altitude and the actual name is ‘Oi Karvounades’. It is a trading and farming village, many local products are produced by farmers. In the centre of the village is the bakery "Kythira" which is known for producing Paximadi, which is hard-baked bread in stone ovens. ‘Karvounades’, the name, is derived from 'Karvouno' meaning 'charcoal'. Probably because of the fact that after a fire in the area, the trees were burned and the remains were used by the residents as charcoal. Here, in the centre of Karvounades, is the church of Agios Georgios located, recognizable by the light blue dome. Every year great festivals are held here where fine wine and food is served to the guests. Three kilometres northeast of Karvounades is Fratsia located, a village where every year a large agricultural exhibition is being held. In Fratsia are also the churches of Agia Eleousa and Agios Charalambos. The inhabitants of the village are mainly farmers and stockbreeders. In this area you will see lots of grazing cows, sheep and goats. In the centre of the village is a large square where an old well and an old school are. In the village are many beautiful mansions, some of these have been converted into apartments to rent.


Kythira: Where on the map is Karvounades located? 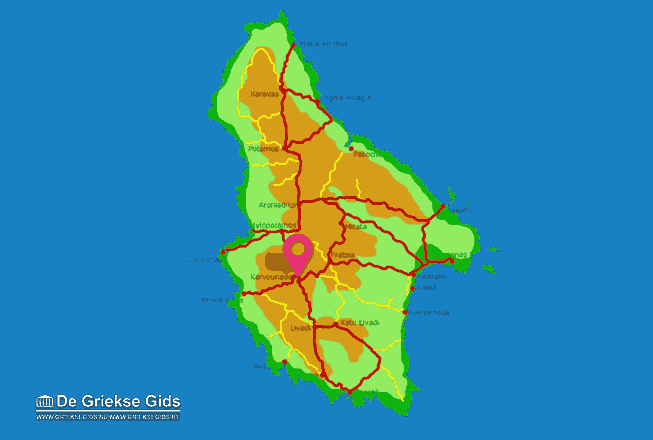