Ano and Kato Livadi. Ano and Kato Livadi are two neighbouring villages, four kilometres north of Chora (Kythira town). In these villages, which are surrounded by olive trees, plane trees and almond trees, live about 250 permanent residents. When in 1709 the British arrived on Kythira, they built a number of beautiful buildings and an impressive bridge. The Katouni stone bridge was built in 1822, it consists of thirteen arches and is one of the biggest of its kind (110 meters long). It is said that the bridge became so long because of an English engineer who fell in love with a girl in the village Katouni. As long as he was building the bridge he was allowed to stay, so the bridge became longer and longer. That’s why they also call the bridge "bridge of love"! Other important buildings are the old English school in neo-Gothic style, the church of Agios Andreas with murals dating from the twelfth century and the Byzantine museum in Kato Livadi at the church of Analipsi which was built in the 17th century.

Four kilometres southwest of Ano Livadi is the monastery of Agia Elesa located. From the monastery that sits high on a mountain, you have a fantastic view over the whole island. In the village are several shops, restaurants and cafés and a number of apartments and rooms for rent. Around the village are several small hamlets that have received the names of families like Mazarakianika, Skoulianika, Katelouzianika. At short distance from Livadi are some lovely coves where one can swim such as the Bay of Melidoni. The small beach of Melidoni is a wonderful sandy beach where some thatched umbrellas and some sunbeds are. When sitting on the beach, you can look straight towards the high cliffs of the island to Avgo, also called Chitra, which lies a few kilometres south of the beach.

Livadi in other languages


Kythira: Where on the map is Livadi located? 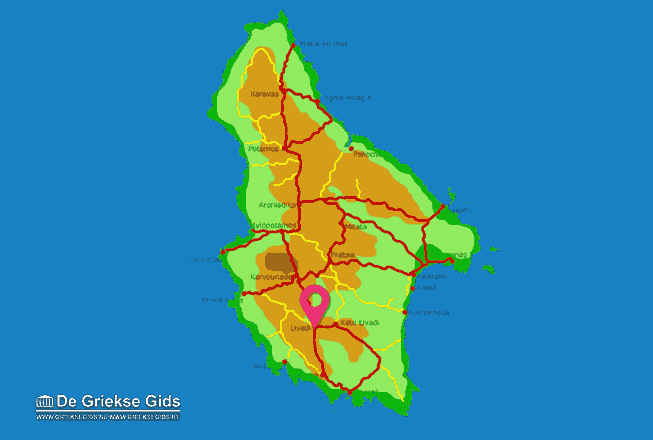