Mylopotamos. Mylopotamos is one of the oldest villages of Kythira. It is surrounded by lots of greenery and water. In the village everywhere you hear the flowing water, a nice peaceful noise.
Mylopotamos is located about fifteen kilometres north of Chora (Kythira town) and owes its name to the many mills that are here in the area (Mylos means mill and potamos means river). The village is considered by locals as one of the prettiest villages on Kythira. In the centre of the village is the church of Agios Charalambos with its high bell tower. Very cosy is the local kafeneion (café) where during the summer, guests can cool off in the shade of the trees.

The residents of this village take care of their houses and streets well, everything is neat and tidy. We think it is one of the nicest and most beautiful villages of Kythira. Near the square there is a small waterfall and in the water you see swimming ducks. Kato Chora, that’s how they call the other part of the village, is located less than a kilometre further to the west, this is the most traditional part of Mylopotamos. Here are the old English school and the ruins of a Venetian castle which remind us of the occupation by the British (1709) and by the Venetians (1502).

Near the village is the waterfall of Fonissa (Kataraktis tis Fonissas). The walk from the village, which lasts less than ten minutes, runs through a beautiful area where many tall plane trees are. The waterfall is about twenty meters high and around the waterfall, small lakes are formed. Fonissa literally means ‘murderess’ and this name derives from the legend that once upon a time, a young girl drowned here at the waterfall. Another attraction is the cave of Agia Sofia which covers an 2200 square meters area and where beautiful stalactites and stalagmites can be seen. In the cave is the church of Agia Sofia located with paintings on the rocks dating from the thirteenth century.

Mylopotamos in other languages


Kythira: Where on the map is Mylopotamos located? 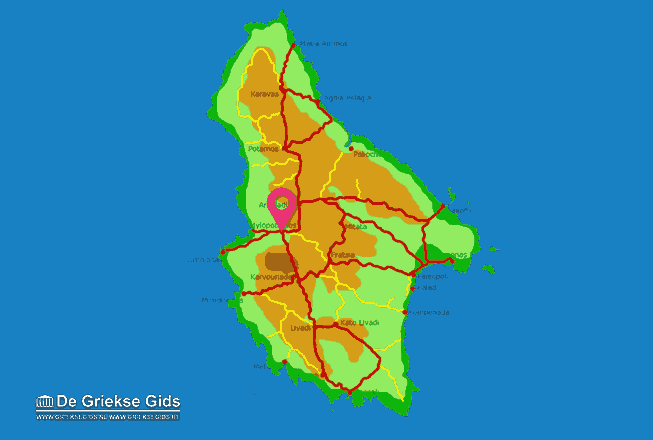