Kapsali. Kapsali is a tourist village in the south of Kythira, three kilometres southeast of the capital, Chora (Kythira town). It is located on two adjacent bays where fishing boats and tourist boats moor. In the middle of the two bays is a narrow peninsula on which the chapel of Agios Georgios is located next to the lighthouse. In Kapsali are many shops, restaurants and cafes, all kinds of apartments and smaller hotels, there's even a campsite. In the larger bay (west) you see mainly tourist boats, in the smaller bay (east) you see mainly fishing boats. When you stand on the middle peninsula and you look behind you, you will see the high cliffs and mountains in the hinterland, the Venetian castle of Chora and the white monastery of Agios Ioannis which is actually built into the rocks of a steep precipice. Here the Holy Agios Ioannis the Theologian would have begun his book the "Apocalypse" before he left for the island of Patmos. On the slopes of the mountain is a pine forest that makes the village look scenic. You can swim in both bays of Kapsali, where several beaches are. A lovely little bay is located west of the larger bay, between high barren rocks and is only accessible by foot. At these beaches of Kapsali you can enjoy all kinds of watersports or rent pedal boats. From Kapsali you have a fantastic view of the 200 meter high islet Avgo. On this islet are beautiful caves. You can visit Avgo with tourist boats from the village.


Kythira: Where on the map is Kapsali located? 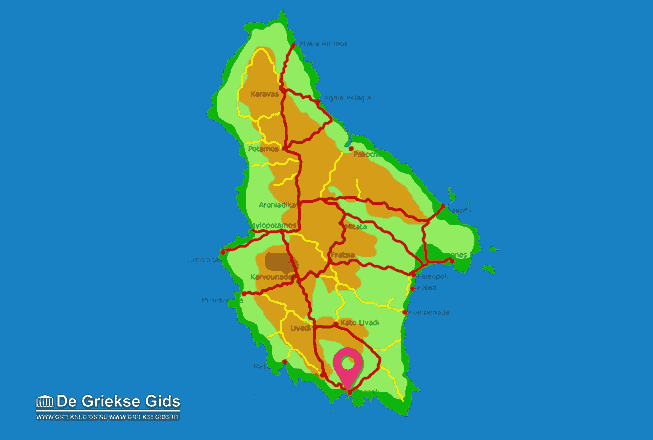