Kaminia. A few kilometres before you reach Poliochni is the village of Kaminia located. It is a traditional village of Lemnos, which lies on the slopes of a low hill. It is an agricultural village where the inhabitants are mainly farmers. Previously, the village was on the beach, where Byzantine cemeteries were discovered. Interesting sights in Kaminia are the many chapels, the Church of the Assumption of Mary (1852) and the old crane with Turkish inscriptions.

The village has a very good taverna, the taverna of Andreas. Blue chairs and tables on the square ensure appropriate 'Greek' atmosphere.

Beautiful beaches in this area are the beaches Molos, Xespasmata and Kokkinovrachos (Red rock).

Not far from the ruins of Kaminia lies Poliochni. Poliochni is one of the oldest Neolithic settlements in Greece and of the entite world. The Poliochni ruins dating from the year four thousand BC, are located 15 kilometres east of Myrina, near the village of Kaminia.

In the period 2000 to 3000 BC, Poliochni would have been together with Troy (now in Turkey), the most important settlement in the northern Aegean Sea. Poliochni is surrounded by walls. The walls on the western side are more impressive, this is because on that side, flowed a river which caused erosion of the fundamentals, therefore on that side, the wall was made stronger and larger.

It seems that in the city used to live a peace-loving nation that was engaged in agriculture and animal husbandry. It was an important trading centre and the port of Poliochni was one of the first commercial ports in Europe. The city was well organised, the houses were built of rectangular stones, there were squares, streets, wells, public buildings and probably a small parliament, a proof that there was a form of democracy as we know it today.


Lemnos: Where on the map is Kaminia located? 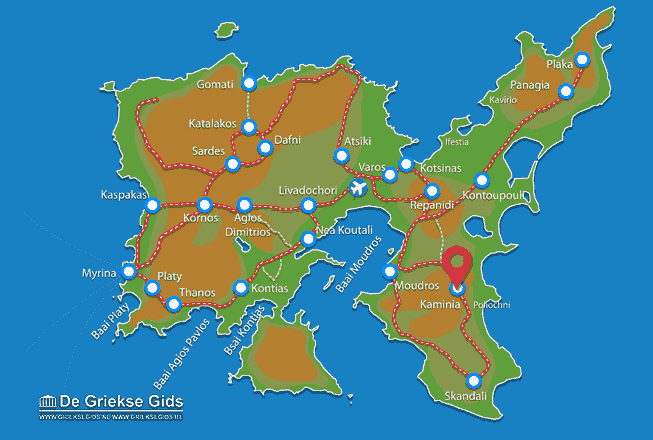