Livadochori. Livadochori is next to the airport of Lemnos located, 15 kilometres east of Myrina. It is a traditional village with cobblestone streets that is mentioned since the Middle Ages in old archives. The name of the village is composed of the names ‘Livadi’ meaning 'pasture' and  ‘chori’ (Chorio) which means ‘village’.

During the Turkish occupation in the 18th and 19th centuries, it was one of the largest and most populated villages of Lemnos. In the village as well as  Greeks, there also used to live Turks of a higher rank.

The village was in the Middle Ages little more to the west, where the chapels of Agios Vasilios and Agios Ioannis are. Later, the village was named Kefalochori which literally means "main village". It seems that, after an epidemic illness erupted, the villagers left their village and built up again at the current location.

In Livadochori is the church of Agia Marina located, which was built in the year 1894. In the past few years several traditional mansions in the village were transformed into luxury apartments. That’s why the village nowadays has attracted lots of tourists.

Between Livadochori and Karpasi there is a historic building where the monastery of Agios Pavlos was located (13th and 14th century) on a farm and where the archbishop had settled.


Lemnos: Where on the map is Livadochori located? 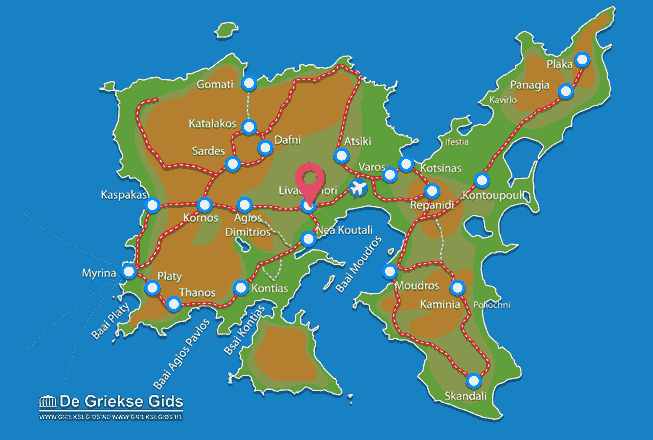