Poliochni. Poliochni is one of the oldest Neolithic settlements in Greece and of the entire world. The Poliochni ruins dating from the year 4000 BC, are located 15 kilometres east of Myrina, near the village of Kaminia.

In the period 2000 to 3000 BC, Poliochni would have been together with Troy (now in Turkey), the most important settlement in the northern Aegean Sea. Poliochni is surrounded by walls. The walls on the western side are more impressive, this is because on that side, a river flowed which caused erosion of the fundamentals, therefore on that side, the wall was made stronger and larger.

It seems that the people living in the city were a peace-loving nation that were engaged in agriculture and animal husbandry. It was an important trading centre and the port of Poliochni was one of the first commercial ports in Europe. The city was well organised, the houses were built of rectangular stones, there were squares, streets, wells, public buildings and probably a small parliament, a proof that there was a form of democracy as we know it today.

Poliochni in other languages


Lemnos: Where on the map is Poliochni located? 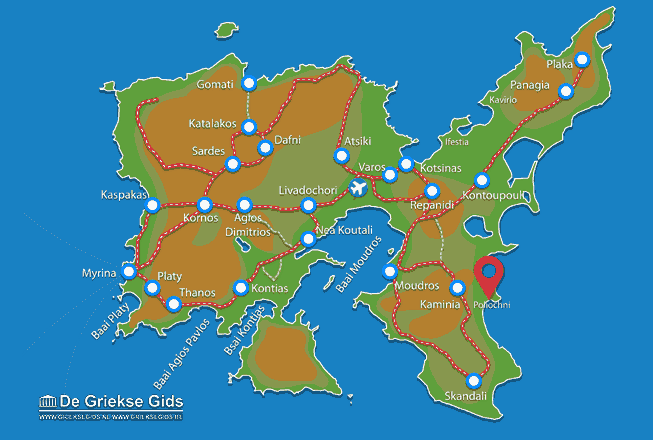