Panagia. Panagia is a village in the far northeast of the island of Lemnos. It lies 38 kilometres from Myrina and it is from Myrina within 45 minutes by car reachable.

It lies east of the hill Alepotrypes on a fertile plain. The provincial road to the northeast runs through the village of Plaka. Most residents are farmers, breeders, beekeepers and fishermen.

The village was in the middle of the 19th century established by people from other villages on Lemnos. Many of them were people who already had a piece of land here, so they built a house here. In this area there was only an old convent probably since the 13th or 14th century which was dedicated to the Holy Mother (= Panagia).

In 1925, many Greek refugees from Asia Minor came to live here, so the village significantly expanded. Economically, since then it has gone better in the village and that was mainly because of the cotton and the wheat that were produced here.

What's even more to see and do? Six kilometres west of Panagia is the ancient site of Kavirio. The nearest beach is 1.5 kilometres away. When you are in the village, via a dirt road you can get to the beach Kolokithi (meaning 'zucchini'). It is a quiet sandy pebble beach in a dune-like area.

Panagia in other languages


Lemnos: Where on the map is Panagia located? 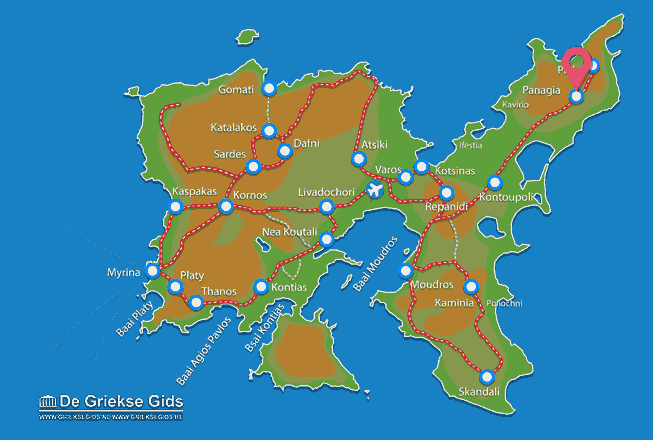