PORTARIA. Once upon a time, Portaria was the main trading center of twenty villages of mount Pelion. In the early twentieth century, Hotel "Theoxenia" in Portaria was the largest and most luxurious hotel in the Balkans. Today Portaria is like the "host" of Pelion. Worth a visit are the neoclassical buildings. Many of them function as hotels. Every year, in late August, a traditional wedding is performed and celebrated in Pelion. Portaria is located on the slopes of mount Pelion,14 km (8 mi) from the city of Volos. From here there is a breathtaking view to the mountains and the Pagasitic bay. Portaria has lots of flowing water, even on the central square with its terraces and high trees.

The Portaria municipality consists of four villages: Portaria itself, Alli Meria, Stagiates and Katichori. Portaria was given the name of the Byzantine church of the Holy Mother "Portarea" located here. Alli Meria is a newer village that was built in the traditional style. Mature flowers grow everywhere and there is a nice view of Volos. The village Stagiates located northwest of Portaria as are the other villages, is in the middle of a green area with lots of plane trees and other trees. Stagiates is known for traditional sausages produced here. Each July, festivals called "sausage party" are held in the central square of Stagiates. Also from here there is an excellent view to Volos.

Katichori,  also called Katochori (Kato = down, Chorio = village), is located south of Portaria. Here they make good wine and tsipouro (gin) of grapes. There are no large production facilities. That's why most is consumed locally. Another occupation of the locals is the production of olive oil. In the area around Portaria, there are thousands of olive trees.

In the municipality of Portaria there are many hotels where you can stay. One of the most famous hotels is Xenia Palace Filoxenia. Other hotels in the center of Portaria are Portaria Hotel & Spa, the resort Pelion, the 5 star hotel Maritsa and others. You can also rent a traditional house here. The villages of the municipality of Portaria are also very popular wth hikers. There are many beautiful marked walks. All these routes have names, so there is the "trail of the Centaurs" and the "trail of Jason."

Portaria Pelion in other languages


Magnesia: Where on the map is Portaria Pelion located? 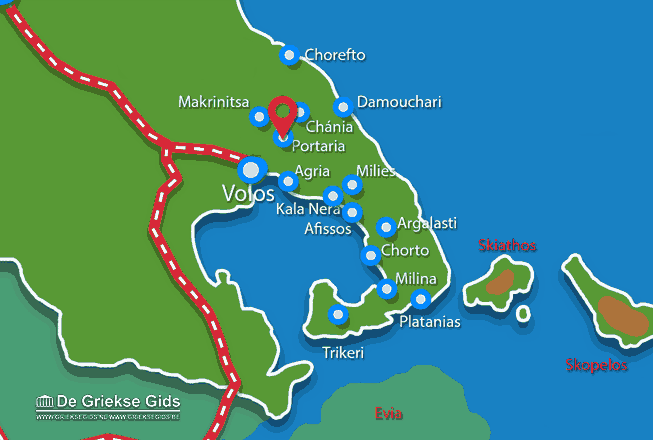 The map of Magnesia (©JustGreece.com)