Afytos. Afytos, also called Athytos, is a fishing village in the northeast of the Kassandra peninsula in the prefecture of Halkidiki. The village is located 75 kilometers (47 mi) southeast of Thessaloniki and 45 kilometers (28 mi) from the capital of Halkidiki, Polygyros.

From Afytos you have a magnificent view over the bay of Kassandra, also called the Toroneo-bay. But first you have to walk from the square of the village towards Vrachos (the Rock) or to the Acropolis of Afytos near Koutsomylos. You will not regret the walk for the beautiful view!

Also noteworthy are the sources of Vrisitsa and Moudounou, but the most popular sites are the white sandy beaches of the village, visited by thousands of tourists in the summer months. The best known beaches are those of Moudounou, Varkes and Liosi. Next to the beaches are many nice restaurants, pizzerias, beach bars and cafes. There are also many shops and souvenir shops.

Afytos is a traditional Macedonian village with characteristic stone houses and narrow streets and alleys. On the square of the village stands the church of Agios Dimitrios, which was built in 1857. In the village is an ethnographic museum that was founded in 1980 and where artifacts from everyday life of previous centuries are presented. Every year on August 15, the village holds a big feast in honor of the Blessed Mother Mary.

Afytos has a rich history. It has been inhabited since the year 3000 BC. It even had its own currency on which the head of Zeus was portrayed. Here, Agisilaos, the King of Sparta, died in the year 361 BC.


Halkidiki: Where on the map is Afytos located? 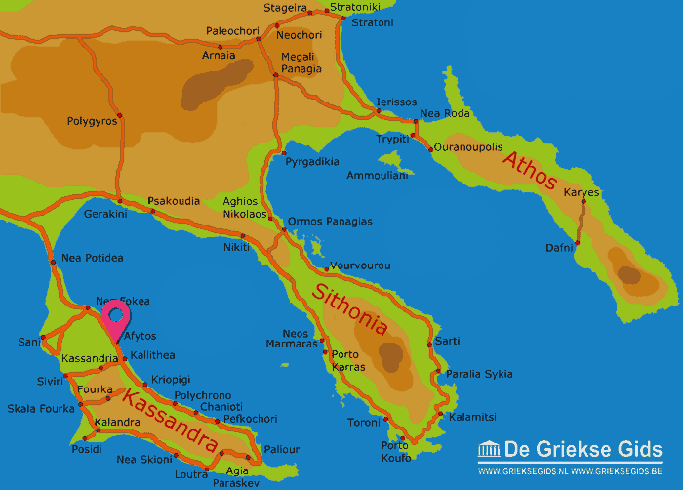