Paralia Sykia and Sykias. Sykia consists of two villages. Sykia village is in the hinterland, and on the other side, the village of Paralia Sykia, meaning the beach of Sykia.

Paralia Sykias is located 147 kilometers (91 mi) from Thessaloniki and 86 kilometers (53 mi) from Polygyros. This is the largest natural harbor in Greece. Sykia in Greek means “fig-tree.” Sykia is one of the oldest villages in Halkidiki. You cannot miss the old houses and buildings dating from the 19th century.

Sykia is the main village with no fewer than 3,000 inhabitants. Writings from the 14th century show that even during that time, people lived and worked here. The former name of Sykia is Longos.

At the beach of Sykia are several rooms and apartments for rent. There are five hotels and some campsites.  The area is very attractive to campers.

Many beautiful sandy beaches characterize Paralia Sykias. White sandy beaches are in abundance here. In the wider area there are also several historic churches. On the beach and in the vicinity there are many taverns and seafood restaurants.

The distance from Sykia to Paralia Sykia is approximately 3.5 kilometers (2 mi).

Sykia in other languages


Halkidiki: Where on the map is Sykia located? 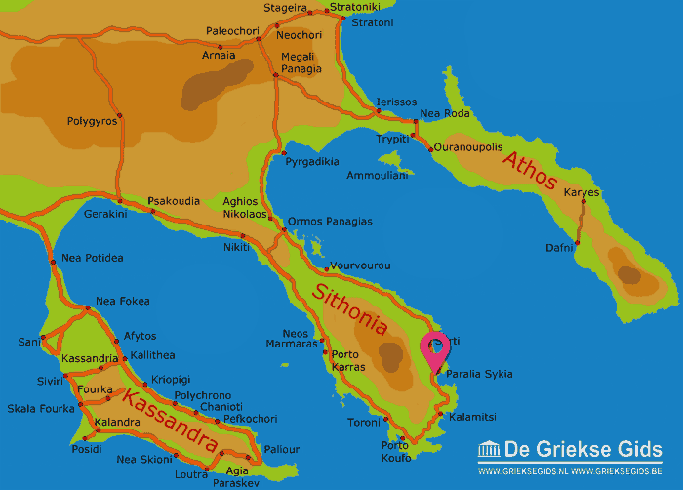