Neochori. Neochori is a mountain village in the east of the prefecture of Halkidiki in Greece. It lies between the villages of Paleochori and Stageira. In Neochori is a small village square and the residents (approximately 800) are almost all farmers and gardeners who grow pine trees. In this region many beans are cultivated. Most people used to work in the metal industry.  During the Turkish occupation lots of Slavs came to the village to work in the metal mines.

Neochori is located in the middle of a beautiful natural setting, surrounded by picturesque wooded hills and valleys. It lies at 570 meters (1,870 feet) altitude and there is plenty of flowing water. In Neochori, which belongs to the municipality of Arnaia, every year many activities are organized such as festivals and cultural activities (examples: the Feast of Agios Athanasios on May 2 and the feast of Profitis Ilias on July 20).

Neochori is an old village that already existed in the 16th century. The inhabitants of the village played a very active role during the revolt against the Turks in 1821. Most buildings of the village are very old, some dating from before the 18th century.

The patron saint of the village is Agios Georgios. Neochori is very popular with travelers who stop here to savor a cup of Greek coffee and enjoy the peace and nature.


Halkidiki: Where on the map is Neochori located? 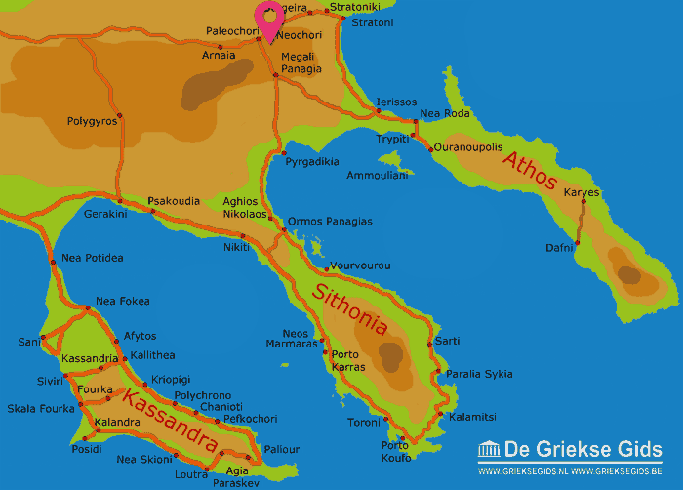