Polychrono is very touristy and here you will find many hotels and apartments. The beautiful long sandy beach attracts thousands of tourists every summer. This beach is also ideal for watersports. You can enjoy canoeing, jet skiing, pedal boats and much more.

The village is very lively. There are many tourist shops, restaurants, bars and nightclubs. There are also several boulevards with a variety of shops. In the village, which has about 1,000 permanent residents, you can visit the ethnological museum. This museum exhibits objects of daily life from previous centuries; a loom, a wine press and on display all sorts of sieves.

The area around Polychrono has been active since ancient times. This was the location of the ancient city of Neapoli. The past has come to light, bit by bit, as excavations reveal the secrets of ancient times. In Giromiri hill you can see the ruins of houses and a cemetery dating from the 6th century BC. In the village there are also several historic churches such as the church of Agios Athanasios from the year 1912 and the church of Christ from 1860.

Various festivals are held annually in Polychrono, including a feast on May 2 (Saint Athanasios) and on September 8 (the feast of the Blessed Mother).

Three kilometers (less than 2 mi) from Polychrono towards the hill lies the small lake of Mavrombara with a resident population of turtles. The area is a protected natural area that is very popular to nature lovers and hikers.


Halkidiki: Where on the map is Polychrono located? 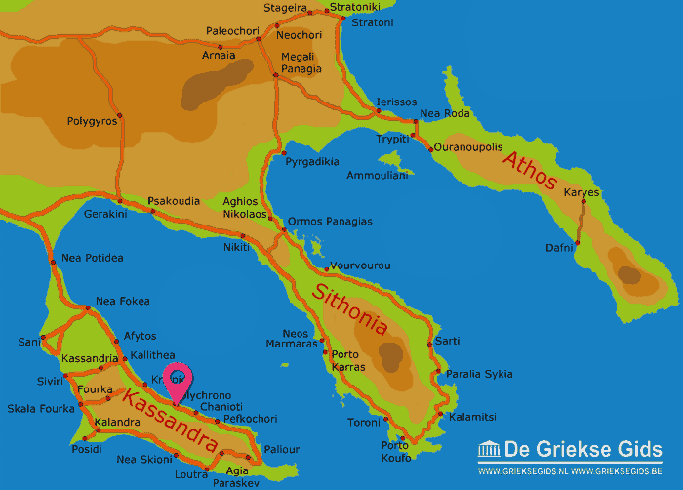