Ierissos. Ierissos is a town with about 3,000 inhabitants northwest of Ouranoupolis, 70 kilometers (43 mi) east of Halkidiki’s capital, Polygyros, and 100 kilometers (62 mi) from Thessaloniki. It is located on a bay, in the same location where the ancient city Akanthos stood in the 7th century BC.

Historically, Ierissos has been a fishing village, where boats were built and restored. Ierissos has a wonderful beach, many hotels and apartments, shops, restaurants and many nice taverns. There is also a harbor from which boats make day trips to the eastern coast of the Holy Mountain. A striking phenomenon at the beach are the strange rocks, which the Greeks call Kakoudia, jutting high out of the in the water.

Just outside Ierissos, between the village of Roda and Trypiti, the Persian King Xerxes, dug a channel 2,900 meters (9,500 feet) in length in the year 480 BC. This was so his fleet could sail from one side of the peninsula to the other. This channel was later closed, but is still visible today.

Throughout the year, various cultural events are held in Ierissos, including ones such as a festival held Good Tuesday before Easter, in honor of 300 villagers who were murdered during the Turkish occupation; June 29, the feast of Agios Pavlos; July 20, the feast of Profitis Ilias; and on Boxing Day.

Ierissos in other languages


Halkidiki: Where on the map is Ierissos located? 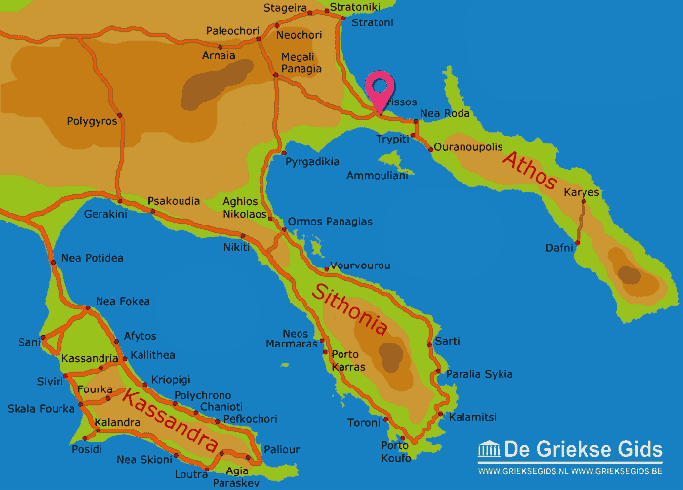