Kalandra and Posidi. Kalandra is a traditional village on the Kassandra peninsula in the Greek prefecture of Halkidiki. It is located a 100 kilometers (62 mi) from Thessaloniki and 60 kilometers (37 mi) from the capital of Halkidiki; Polygyros. The inhabitants of Kalandra are engaged in olive oil production and tourism.

Kalandra is located close to Mendi, an ancient city. Mendi was well known for its culture, art and its very famous wine. This was the home of the Greek sculptor Paionios, whose famous work of Athena Nike, which can be seen in ancient Olympia. Mendi had its own coins on which the Greek God Dionysus was depicted. The back of the coin showed a donkey. In ancient times Mendi was founded by the inhabitants of Eretria, a town on Euboea. Vigla is the site of the ruins of ancient Mendi. The ancient ruins of the Temple of Poseidon is located four kilometers (less than 2.5 mi) from Kalandra. Not far from the temple is a lighthouse built in the year 1864 and the church of the Holy Mother dating back to 1619.

About 2.5 kilometers (1.5 mi) southwest of Kalandra lies the seaside town Posidi. Posidi was originally a fishing village that has evolved over the decades into a modern resort. Posidi has a nice sandy beach, which is very popular with tourists. In both Posidi and Kalandra, are many traditional taverns and seafood restaurants. You will also find bars and nightclubs, ideal for people who love entertainment.

Kalandra in other languages


Halkidiki: Where on the map is Kalandra located? 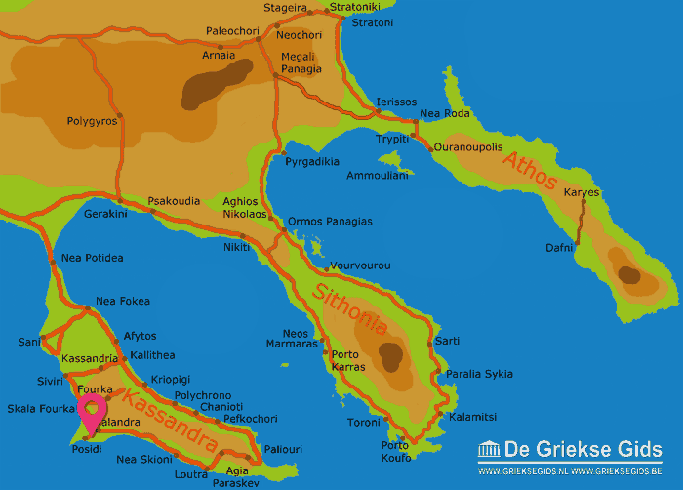