The Achilleion. The Achilleion is one of the most famous palaces in Greece and one of the most important architectural landmarks on the island of Corfu. It is located near the village of Gastouri, 10 kilometres southeast of Corfu town. The Achilleion was built in the years 1889-1891 on the site of a villa that belonged to a wealthy Greek. The architect of the project was the Italian Raffaele Caritto. The whole project was completely financed by the Empress Elisabeth of Austria, better known as "Sissi". Elisabeth stayed here due to her poor health so this became her second residence. The palace was dedicated to the Greek hero Achilles, hence the name Achilleion. In the gardens of the palace are shown statues of figures from Greek mythology, such as the image of the 'Dying Achilles' and the images of the 9 muses. After Elisabeth was murdered on September 10, 1898, Emperor Wilhelm II of Germany, bought the villa. He placed a colossal statue of Achilles in the garden with the inscription "To the greatest Greek of the Greatest German. Wilhelm II visited regularly and the palace was used mainly for diplomatic purposes, until the 1st World War broke out. During the 1st World War the building was used as a hospital by the French and Serbian troops. After the end of the World War and the defeat of the Germans, the palace was owned by the Greek state.

During the 2nd World War, German and Italian hands owned the Achilleion again, they used it as a headquarters for strategic purposes. After the 2nd World War, it became the property of the Greek Tourist Board. In 1962  a casino opened on the top floor and the lower floor became a museum. Since 1983, it's only a museum, and each year is visited by thousands of tourists.

Achilleion in other languages


Corfu: Where on the map is Achilleion located? 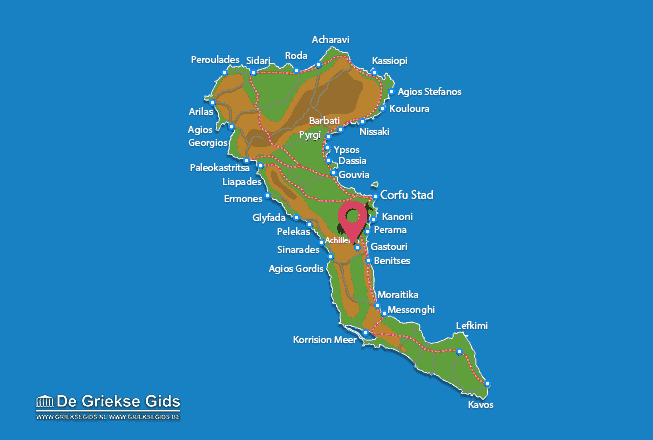 The map of Corfu (©JustGreece.com)