Karteros. Karteros is the name of a resort village which is located close to the airport of Heraklion in Crete. Although Karteros is just outside the city of Heraklion, the governance of the municipality is part of Hersonissos. The beach of Karteros is very nice and well organised, it is accessible via the old route Heraklion-Hersonissos. To the left of the beach, the river flows. In ancient times the river was called Amnissos and also the location was called Amnissos. There was a palace here; the remains can be seen on a low hill on the eastern side of the beach (at hotel Minoa Palace). In ancient times it was called “Omfalio Pedio" which means "Navel Field". According to Greek mythology it was here that the newborn Zeus’ navel cord was located, when he was brought to Ideon Andron to be hidden. During the Minoan period, this was the place where the Minoans brought their ships ashore to restore or to protect them against the enemy attacks. It was at the port of Knossos according to Homer, on the beach that Theseus and Odysseus were washed up. At Karteros one can see various archaeological sites, such as the sanctuary of Zeus Thenatas and the cave of Eilithia.

Karteros in other languages


Heraklion Prefecture: Where on the map is Karteros located? 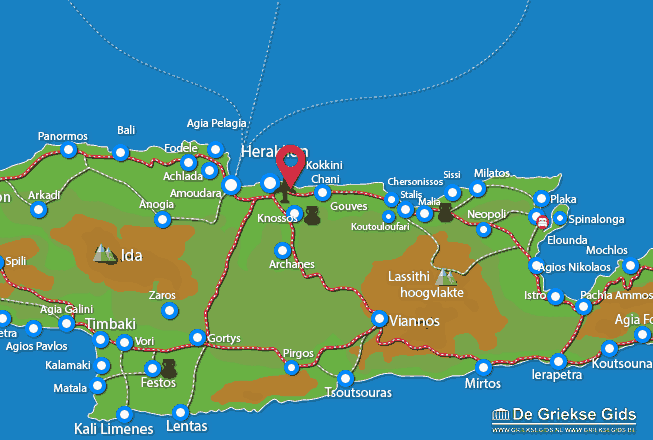