Phaistos is an ancient site, on the Greek island of Crete. It is, beside Knossos Palace, the most famous palace of antiquity. It is built in 4000 BC on a hill in the heart of the Messara valley. This city of Phaistos was in Minoan times the regional centre of the whole of south Crete. The King of Phaistos, Radamanthos would have been, according to mythology, the brother of King Minos. This city owes its name to the son of Hercules who was called Phaistos. Phaistos is one of the oldest and most important cities of Prehistory. In one of the rooms at Phaistos is found the world-famous “Discus of Phaistos”. This discus is written on both sides, archaeologists have yet not deciphered the texts.

Phaistos was in the Minoan period an extensive area and even the islands Paximadia (then called Lito) belonged to Phaistos. Phaistos was big, independent and had its own government, they even had their own coins. Phaistos participated, together with other Cretan cities in the Trojan War with Idomeneas as a leader.

Around 200 BC, Phaistos was totally destroyed by Gortys (the neighboring town). In Festos ruled the dynasty of Radamathis and in Knossos the dynasty of King Minos. At the foot of Phaistos is Gerontomilos: literally "Old mill". The -now almost dry- river runs through this area; Geropotamos (old river). "Gerontomilos" is a traditional Cretan watermill.

Phaistos in other languages


Heraklion Prefecture: Where on the map is Phaistos located? 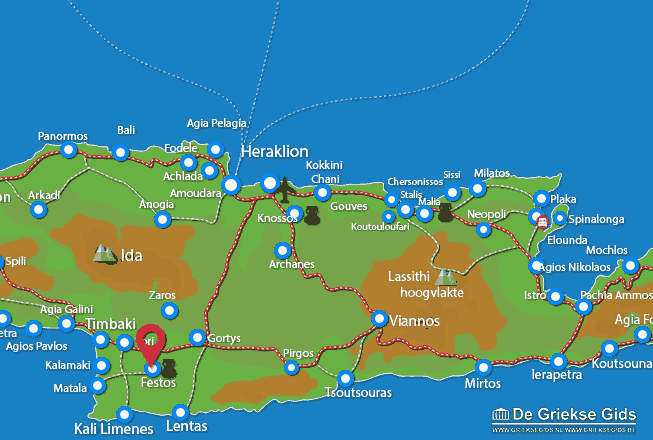