Timbaki. Timbaki is a small town, located in the south of the Greek island of Crete. In Timbaki are quite a lot of shops and also the large supermarket of “Marinopoulos” is located here. The main street of Timbaki is always crowded and chaotic. The nearest beach is that of Kokkinos Pirgos, two kilometres to the west and locals make good use of this beach. In Timbaki are three pharmacies on the main road, also several banks, including the National bank and the Commercial bank on the main road. The post office is located on this road, from the centre towards Mires on the right side. Every Friday there is a market in Timbaki, with lots of clothes, shoes, household items and fruits and vegetables from local farmers. The inhabitants of Timbaki generally get their income from agriculture. Just outside Timbaki is a large area crammed with greenhouses. Many people in Timbaki do have multiple jobs. They have often their own business in the centre of Timbaki and in addition they are farmers and grow tomatoes, melons, artichokes, etc. Timbaki was an area with religious tensions during the Turkish era. This village was an important point of communication between the villages of West Crete and the Messara Valley. In 1822 there had settled two thousand Turks in Timbaki to disrupt this communication and to guard the passage. During fights 30 Turks were killed and the rebels had recaptured the village of Klima. It was the first major battle in the Messara Valley. Timbaki is today a small town with about 8.000 inhabitants. Every year on August 25 the feast of "Agios Titos" the patron saint of Timbaki is celebrated Timbaki is,after Mires, the largest “town” in the Messara-plain in the south of Crete.


Heraklion Prefecture: Where on the map is Timbaki located? 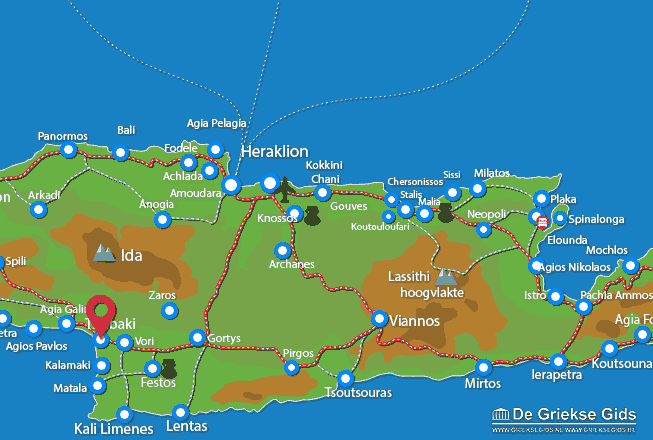