Akrotiri peninsula. Akrotiri is a peninsula east of Chania city, which is the natural Souda Bay, one of the largest natural harbours in Greece. The historical peninsula is closely linked to the freedom struggle of the Cretan people against the Germans during World War II. On the hill of Profitis Ilias  is the family tomb of the politician Eleftherios Venizelos. From here there is a magical view to Chania city. In Akrotiri, there are many monasteries,  Goeverneto monastery, the monastery of Agia Triada Tzagkarolon (has its own museum), the Monastery of Agios Ioannis Erimitis, the Monastery of Agios Ioannis Prodromos Kalograion (with its own museum) and monastery of Agios Ioannis Eleimon . North of Akrotiri  are the nice beaches of Stavros and Chorafakia (Kalathas). On the beach of Stavros, with a turquoise-colored sea, movie scenes of the successful film "Zorbas" were made. Near the beach you will find the cave Panos, which according to archaeologists, was inhabited since Neolithic times, which is proved by the finds found there. Another cave is the cave Arkouda (meaning bear), which is located near the monastery Gouverneto. The cave got its name from the impressive stalagmite which resembles a bear. In this cave there is a small chapel dedicated to the Holy Mother.

Akrotiri in other languages


Chania Prefecture: Where on the map is Akrotiri located? 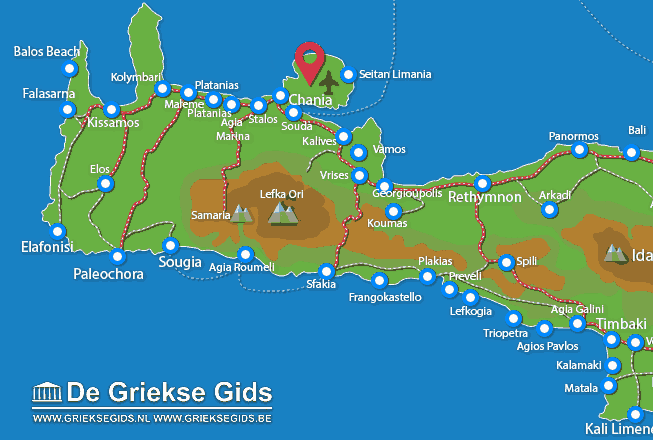