Maleme. Maleme is a tourist village on Crete, 17 kilometers west of Chania town (about 25 minutes by car) and belongs to the municipality of Platanias. Maleme has a reasonable pebble beach and there are many opportunities for water sports. It is a historic village, which was already known during the Venetian period having been proven in documents. In the town Kaykales there was even a tomb found from the Minoan period. The name "Maleme" comes from the Greek word "Malama" (= gold). it is claimed that there was a gold mine in the area. The airport of Chania was located in Maleme, when in May 1941 the German paratroopers were attacking the Greeks. These fights entered history as "the Battle of Crete", which was later even filmed. Here a lot of Germans were killed. If you happen to be in Maleme, then a visit to the German cemetery is worthwhile.

Next to the cemetery is an exhibition showing photos and giving an explanation of how it was back then. Besides the main house there is also a cafeteria where old guns, helmets and other war materials can be seen. In Maleme there are about 700 permanent residents who are involved with tourism and agriculture. Nowadays Maleme is pretty popular and attracts thousands of tourists in the summer. There are many large and small hotels, there are also pension rooms for rent. On the whole length of the beach are restaurants and many terraces. In the village there are, souvenir shops, mini markets, bakeries, groceries and traditional Greek cafes. On the beach of Maleme, sun loungers and parasols are for hire.

Maleme in other languages


Chania Prefecture: Where on the map is Maleme located? 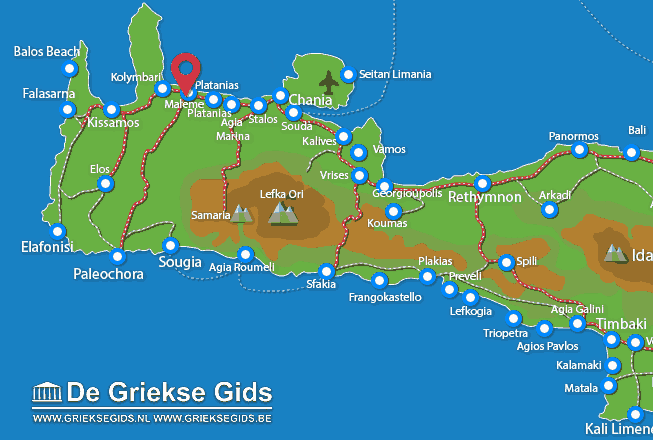