Aradena. Aradena is the name of a river, a gorge and a village in the south of Crete.

The village of Aradena is located at about 600 meters altitude, 15 kilometers (9.5 miles) west of Sfakia and 87 kilometers (54 miles) south of Chania town. The village is only accessible via the route Sfakia - Anopolis. Walking through the gap from the village, there are two mountain trails that lead you down. The gap of Aradena is smaller than the Samaria Gorge but just as impressive, with the high steep walls and rich flora and fauna. Very striking is the iron bridge that connects both sides of the divide. It is a bridge with wooden planks where cars can drive over. From the bridge one can take a bungee jump. The gap here is about 150 meters (165 yards) deep.

Aradena is located in the same place as the ancient Aradin that already existed in the second century BC. In the first centuries AD it was the seat of the ecclesiastical diocese. Aradena is located in a beautiful area with many pine forests. The end of the gorge is located on the south shore at the beach of Marmara. Here tourist boats coming from Sfakia and Loutro moor. At the beach is a kiosk and sun loungers and parasols. When crossing the iron bridge, which by the way was built by the wealthy family Vardinogiannis, and then drive five kilometers, you reach the village of Agios Ioannis. Also Agios Ioannis is located in a beautiful area and the village is surrounded by beautiful pine forests.


Chania Prefecture: Where on the map is Aradena located? 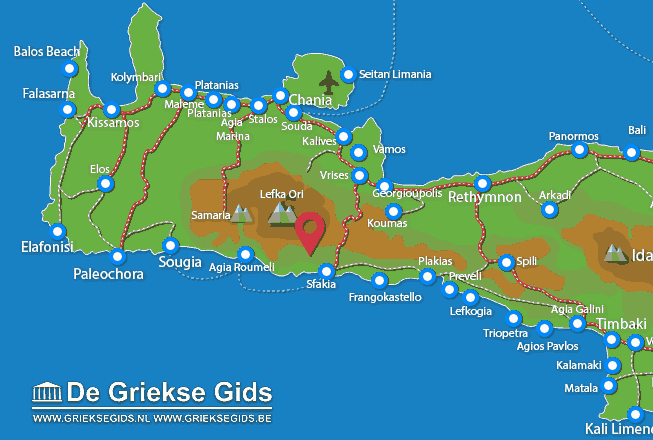