Kolimbari (Kolymbari) is a picturesque coastal village on Crete, with about 1000 inhabitants, which combines sea with mountains. It lies 24 kilometers west of Chania city, it is built on the westernmost tip of the Bay of Chania where the peninsula Rodopos begins. Most residents are farmers or pastoralists. Products that are in abundance in Kolymbari, include olive oil and olives, wine, honey and cheese. Kolymbari is an important historical place for all Cretans, because in 1645 the Turks began their invasion from the harbour to occupy the island. In this port in 1897 also took place the secret invasion of the Greek army, this time to liberate the island. Kolymbari is a coastal town with a small fishing harbour today, which attracts a lot of tourists who come on vacation here. The beaches consist of pebbles. The infrastructure is good and in this region over the years several small but also large hotels and other accommodation have been built. Besides Kolymbari and within walking distance are the places Rapaniana and Tavronitis. Behind the pebble beach are several large and small luxury hotels. The area between Tavronitis and Kolymbari is the quiet area of ​​Chania, perhaps it has to do with the fact that the beaches are pebbly. Sandy beaches are located between Chania city and Platanias, on the eastern side of the bay.

Sights Kolymbari: The old city Diktynna (only accessible by boat on the peninsula Rodopos) and the temple of goddess Artemis from the 2nd century BC, the Odigitria monastery, also known as "Monastery Kyra Gonia" (9th century) where you can visit manuscripts and icons in the local museum. There is also a fishing museum where various instruments are shown by fishermen in the past but are also being used in the present.

Tip: If you are in the area of ​​Kolymbari in August, then it is definitely worth visiting the traditional festival of Kyra Gonia on the 15th of August.

Kolymbari in other languages


Chania Prefecture: Where on the map is Kolymbari located? 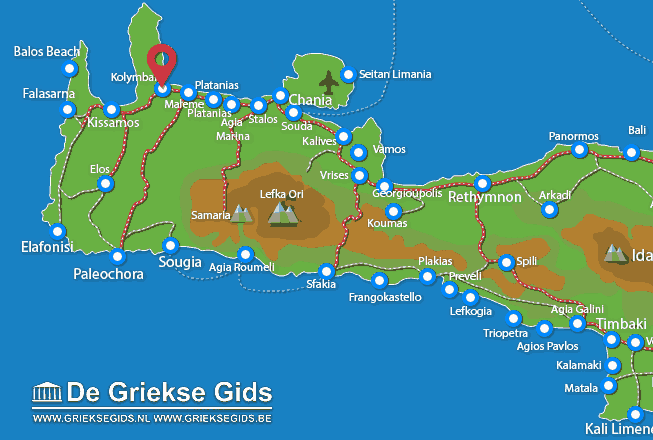