Gavdos. Gavdos is the southernmost island of Greece. Gavdos is located 22 miles from Crete (Sfakia) and 150 miles from Africa. The surface of Gavdos is approximately 37 square kilometers. The highest point of Gavdos is 345 meters high. Gavdos administratively falls under the prefecture of Chania. Gavdos is a beautiful island with beautiful sandy beaches, super clear water and lots of cedar and pine trees. On the island live in total about 6 families. On the island are a number of rooms for rent, small tavernas and cafes. Gavdos is accessible almost daily in summer by boat from Paleochora, Agia Roumeli and Chora Sfakion. The trip takes 3 to 4 hours. In the capital Kastri were detained former political prisoners, as you can see the building that served as a prison. According to Greek mythology Gavdos, the island would have been Ogygia, the island of Calypso. Calypso would have received Odysseus.

In Gavdos are also a number of attractions:
- The lighthouse
- The ethnological museum in Vatsiana
- The most popular beach Sarakiniko with several tavernas. On the beach is free camping.
- The southernmost point of Gavdos and also of Europe Tripiti, which is rock and where you can see three large holes. This point is only accessible by drill.

Gavdos in other languages


Chania Prefecture: Where on the map is Gavdos located? 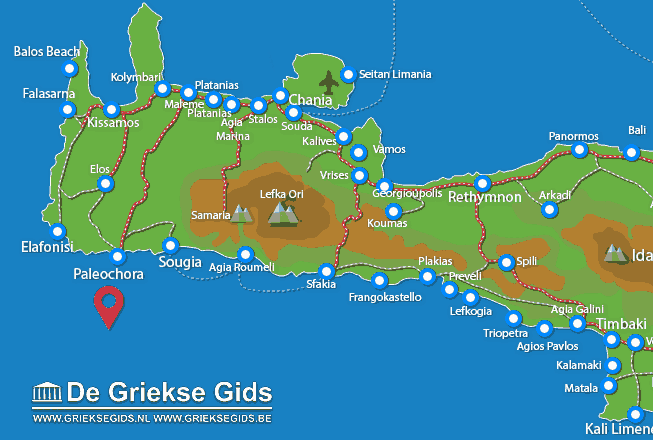