LEFKA ORI. Lefja Ori, which literally means the White Mountains are also called the Madares. The mountain has more than 50 peaks over 2,000 meters high, the highest peak Pachnes (2454 m). The White Mountains is the backbone of the Chania district. In terms of area it is the largest mountain in Crete, but in terms of height it is just a bit below the top of the Ida Psiloritis Mountains. Lefka Ori has a lot of high peaks (more than 30 peaks) over 2000 meters high. The highest peak is Pachnes (2452 m.) And is only a few meters lower than Psiloritis. The mountain range spans from west to east and stops close to the district of Rethymnon, meanwhile many plateaus such as Omalos (altitude 1080 meters) and Askifou (altitude 730 m) are formed. From Omalos you can start the walk in the Samaria gorge, the view here is beautiful. Lefka Ori is actually a large mountain mass that occupies the major part of the prefecture of Chania. On the south side is the mountain towards the sea, there are wild gorges and ravines of exceptional beauty like Agia Irini, Aradena and Imbros. Here is also the Samaria gorge in Agia Roumeli. The villages Paleochora and Sfakia are Also on the south side of the White Mountains. The name Lefka Ori does not originate because the mountains are covered in snow even in April and May, but because of the the colour of the rocks. On the north side the mountain is much more gradual to the north coast and the city of Chania.

Lefka Ori in other languages


Chania Prefecture: Where on the map is Lefka Ori located? 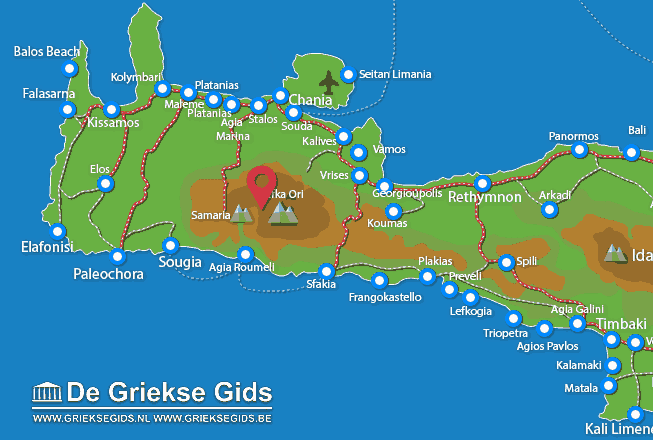