Kournas. Kournas is a traditional village on Crete, north of the coastal town of Georgioupolis about 45 kilometers from Chania city. It is known for its lake which is about five kilometers from here. Lake Kournas is in fact the only natural lake of Crete, the maximum length is approximately 1 km and the maximum width is approximately 800 meters. The deepest point is approximately 20 meters. In the village of Kournas live about 500 permanent residents who are mainly engaged in agriculture. The village is beautifully situated between the mountains about 200 meters altitude above the sea level. The ancient village has preserved the its traditional style, but also this village by the lake,has developed touristically. On the shores of the lake live many turtles .On the edge of the lake are a few tavernas and it is possible to rent pedalo boats there. There are also some apartments and hotels where you can stay. Kournas lake has unique flora and fauna and is the southernmost lake in Europe. In ancient times it was called Korisia but it claims that it has received the current name from the Arabs who invaded Crete in ancient times (Kournas in Arabic means "more"). Every year there are nice traditional festivals that attract many people. On May 5, the feast of Agia Irini and the feast of Agios Ioannis on August 29.

Kournas in other languages


Chania Prefecture: Where on the map is Kournas located? 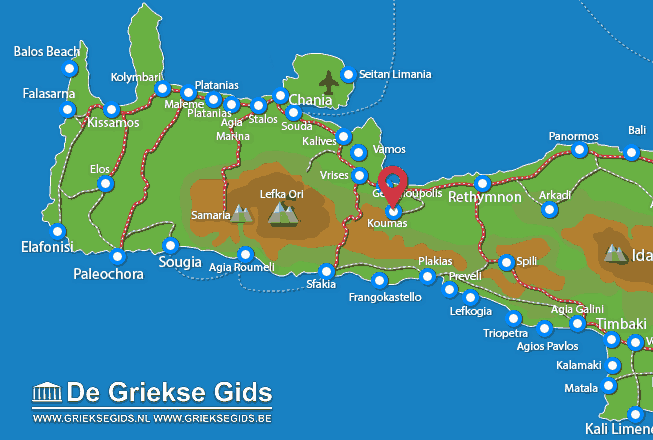